Obama and the Law of Attraction

When he entered the race, Senator Obama’s Intention was to become the 44th President of the United States of America and thus help create a better world in unity through diversity.

He wanted to create a better world and fully put himself in service to do so.  This his intention was larger than himself, and as such people were drawn to the sincerity of his call.

YES WE CAN became the mantra, the slogan, the chant, the Peace Cry, rallying all those who had a deep belief that they could, but who lacked the courage to say it out loudly and really did not believe that they could.

The rallying cry was picked up all over the world and suddenly dreams and hope were unleashed – YES WE CAN became a movement and supported the actions the Senator had to take to realise his dream and hopes, all wrapped up in his intention to become the 44th President. And, YES HE DID 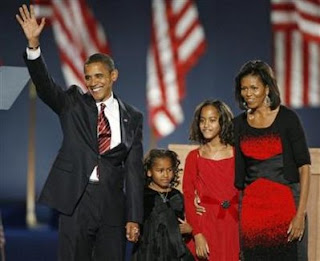 The First Family – the 44th President of the United States of America
The election of America’s First Black President has laid the groundwork/foundation for dreams, hope, love  to be no longer fanciful concepts, but concepts which lead to concrete action, AND, WHO KNOWS, the beginning of a peace movement around the world.

Martin Luther King’s I HAVE A DREAM

Mother Theresa’s  WE NEED TO LOVE WITHOUT BEING TIRED

Barack Obama’s intention YES WE CAN

DREAM, HOPE, LOVE, ACT – THE FOUR PILLARS OF THE BARACK OBAMA MOVEMENT FOR CHANGE. BELIEVE THAT YOU CAN ACHIEVE. Obama believed, Obama achieved.
LET US ADOPT IT AND MOVE FORWARD JOYOUSLY AND IN GRATITUDE

For affirmations and quotes from those who led the way read Muriella’s Corner online, content-rich newsletter and download the latest post-election issue.